Rogue kissing the window of a plane…

(Dee’s note – We continue with the Memorable Moments of Marvel Women series!  Welcome Claire, today’s guest blogger.  If you want to write up a moment, email us at girlsreadcomicstoo@gmail.com.  We’d love the help, there are still a few available!  We’ll be showcasing one to two moments a day, and we’ll have the polls to pick the final five up the first week of March)

Rogue kissing the window of a plane after fetching a long ball in good old x-men baseball just for the joy of being alive and in flight.

All X-Men are made of tragedy, this much we know.

Here’s Rogue’s story, up to a point preceding this page: She’s a runaway (but not a Runaway). Her first pre-teen romantic/sexual fumbling put a boy in a coma and his memories in her brain. She was taken in by a couple who treated her well and loved her.. but who were terrorists, and who groomed her to be a terrorist too. She can’t touch people skin to skin without knocking them out, and unless she has express permission to put someone in a temporary coma it’s a horrible soul-pummelling experience for both parties. When she was sixteen-seventeen, her adopted mother convinced her to use her power on a woman which, unhappily, turned out to be an unforgivable mistake that left Carol Danvers unattached to her life up to that point – and Rogue with so much borrowed memory that sometimes, afterwards, she forgot she wasn’t Carol. She ran away again, to find out and stay with a house full of people who disliked and resented her. It didn’t really help. After she’s touched a person’s skin, she has no idea whether her thoughts and opinions and decisions are her own or not – she only realises that she actually wants to be a good person (!!) when it’s proved to her that Storm had recovered from Rogue’s touch before Rogue took risks to save innocent people in the issue preceding LifeDeath.

Compare this to Wither’s appearance in New X-Men Academy X. He is given (by the writers, I’m not blaming Kevin) no personality outside of his deathtouch and the trauma that’s resulted from it. We’re told he likes art.. but we aren’t shown. He just scowls about, snapping and grumping at people, only relating to them in context of his mutation and subsequent wild guilt.

This here Moment is a prime example of how Rogue (or her writers and artists) doesn’t (..maybe “didn’t”, let me know current X-readers!) allow her shitty power or her hard backstory to be the biggest thing about her. They both impact upon her, and her relationships, and her daily behaviour. But her character, manner within relationships and daily behaviour are there in the first place to be impacted UPON. She’s a saucy sassy jokester, an enthusiastic young adult and a righteous babe first – and second, like most of us, she happens to have some heavy burdens to live with. But she does it. She finds joy anyway.

Look at the body language in her panels, it’s jubilant. She’s hangin’ with her misfit peeps, physically free as she can be, feeling wind and sun on her skin and power in her rise. She can FLY, and that’s amazing! I love how she embraces sensuality even though she can’t actually embrace anybody, how her hotness is an amazing fascination that she can notice and enjoy delightedly just like, or with, any other human.

Everything in the world is bright and good, in this page. Doesn’t matter what you think of that President, doesn’t matter what the X-Men are going to have to struggle with next. Doesn’t matter how uncomfortable you’d personally be with wearing tiny pants and an overloose cropped vest to play baseball or happen upon old men, doesn’t matter what kind of trouble this sighting could potentially get the team in. Even if you’re feared and hated, work so hard, are full to the brim with emotional and mental and familial issues and feel dangerous to get close to, you can enjoy yourself and have fun. The world can still be bright for you. Gosh, X-Men and their persecuted minority themes need that. 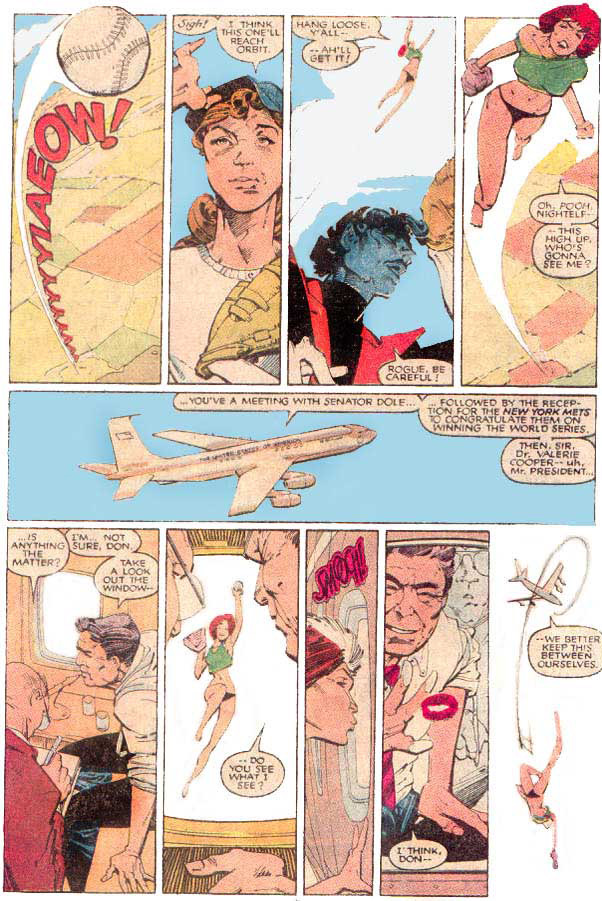 I love Rogue, and I can relate to her. This moment makes my heart soar for her, and for me.

Why would you want to forget it?

5 Responses to Rogue kissing the window of a plane…