Emma: I had to double check with my LCS that nothing I should be buying had sold out before I got there because it was such a light week for me, but it happens.

Chantaal: I’m a woeful three weeks behind on ALL my comics, so my one pick is the one series I make a point not to fall too behind on, X-Factor.

Dee: I was three weeks behind on my comics, and picked them all up last week.  This means I had a lot of reading to do and got a bit mixed up as to what belonged to what week.  I finally have it down. 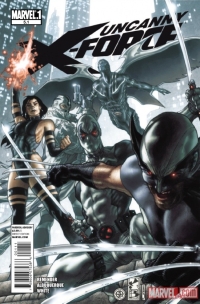 Uncanny X-Force #5.1: Emma: This is probably as close to a breather as this title is going to get after the claw the oxygen right out of your lungs first arc. This one really felt like Remender putting on a clinic, sitting back to put Betsy through the paces and give us the funniest Deadpool moment yet. It warms my heart to see Wolverine so concerned about Lady Deathstrike after he watched X-23 humiliate and demolish her without batting an eyelash and bringing the Reavers back was an inspired choice. Rafael Albuquerque steps up on art duties this month and as much as I dig his usual style, his collaboration with Dean White really brings the ruckus with a wet look driven by gloriously dissonant colour choices. This is how the rough edge of comics should be; gritty, funny, sexy, and unrelenting.

Dee: I picked this up because people keep telling me how great it is and the .1 books are good jumping on places.  Wow.  Just… Wow.  The team combination is great, the team dealing with history in the shape of the Reavers and Australia was great, and Deadpool was just damn funny.  The art suits the story so well, that I found myself flipping back and forth to enjoy little moments again and again.  I feel that I will now be putting this on my pull list, to my genuine surprise. 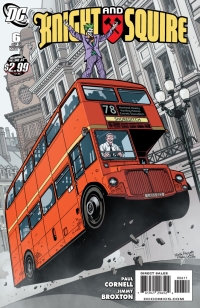 Knight and Squire #6: In which Emma fondly and heart full of sorrow bids farewell to Paul Cornell’s presence in her purchases until his Action Comics run is traded. After the heart stopping cliffhanger of #5, I wouldn’t begrudge Cornell a smug smile and a cuppa but he keeps both hands firmly on the steering wheel to bring Knight and Squire home and prove the viability of his vision of the DCU’s England in inimitable style. There’s some solace in the fact that Beryl is slated to appear in Batgirl soon, but the real loss with the conclusion of the mini is Cornell and Broxton, who I can only hope we’ll see reunited before long on another project.

Dee: I’m with Emma.  The wrap up of this series was amazing, and if you didn’t pick up the singles PLEASE go and pre-order the tpb.  Heck, if you did pick up the floppies, order the tpb!  Cornell has promised us lots of extra goodies.

Xombie #1: John Rozum reanimates the long dormant Milestone property with the incomparable Fraser Irving. It’s surreal and cheeky enough to recall the sensibilities of Grant Morrison’s Doom Patrol but stands easily enough on it’s own to be an intriguing supernatural thriller. Add in Irving’s moody, super-saturated art and you’ve got the first must have new ongoing of the year. This could very well be the future of the DCU in the making as long as Rozum can keep Robinson from killing David Kim. 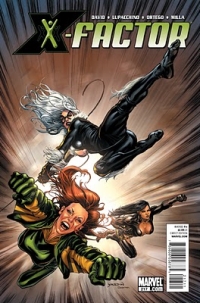 X-Factor #216-217: After two issues (214 & 215) that I felt kind of meh about, Peter David brings the entire team back together in their offices in issue #216. This is what I love most about X-Factor, and what made me such a fan in the first place: the group detective aspect. Monet & Shatterstar discussing his relationship with Rictor, Strong Guy calling Pip an internet troll, Jamie, Layla and Rahne and their various discussions, the subtle meta digs at other comics, Banshee (that is still weird) doing her thing…this is what makes X-Factor such a great book. I can do without all the preachy monologues in #217, however. Where on Earth did that come from, PAD? Regardless, this story arc is shaping up to be epic and I’m not looking forward to the resolution of the cliffhanger #217 left us with.

detective is a bit Holmesian, but much more affable (though it wouldn’t take much for Holmes to be more affable).  His assistant/partner is the one truly telling the story, a young woman that has to keep him in line and always ends up with the crappy tasks and too little credit.  I truly enjoyed this first issue, and want to see what comes next.

Morning Glories #8: Is anyone surprised that I’m putting the latest Morning Glories on the list?  If you’ve been paying any attention at all, you shouldn’t be!  I just… I don’t even know what is going on anymore.  Only, I kind of do.  Pieces are coming together, the state of things at Morning Glory academy is starting to become more transparent even as the mystery deepens and darkens.  It’s now the book I look forward to most each month.

Canastralian. Cosplayer. Comic book addict. Travel addict. Convention addict. ...I think that's a lot of addictions and I might need a 12 step program
View all posts by deense →
This entry was posted in Picks of the Week and tagged Knight & Squire, Morning Glories, ruse, Uncanny X-Force, X-Factor, Xombie. Bookmark the permalink.