The multi-talented Mary Bellamy writes, draws, colors, inks, edits and more. She’s a sketch card artist, a book artist, animator, illustrator and has her own books out as well. This year she’s done a lot of work with Womanthology, and she was kind enough to answer our questions. 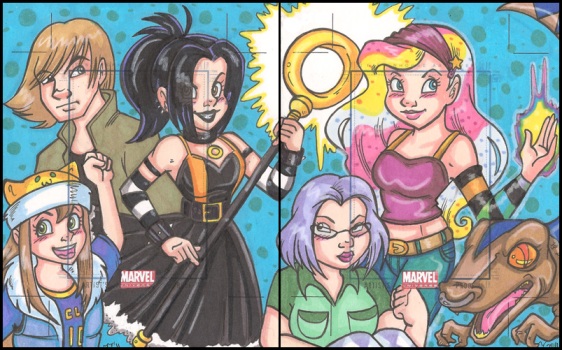 How did you get into comics?

I first got into comics when I was around six years old when Marvel was putting out their Star line cartoon adaptions like Strawberry Shortcake and the Fraggles. I soon became enamored with cartoons. I moved away from comics for a while and got back into them when the comic adaption of Sonic the Hedgehog came out from Archie and then moved into manga when Sailor Moon was on television, and then to independent and alternative comics after attending my first Comic Con in 1999.

Tell us a bit about the projects you’ve worked on.

I’ve worked for several companies. Shanda Fantasy Arts gave me my first break and I was an inker for Shanda the Panda and Katmandu and contributed my own stories to their anthology books. I moved over to Radio Comix and worked on their Mangaphile anthology and later went on to do some short stories, a cover and several pin ups for their other books. I contributed to Antarctic Press’ Gold Digger and Ninja High School anthologies.  Then I moved on to Slave Labor Graphix Fat Chunk where I wrote a two page story. I was asked to do some guest pin ups for some friend’s Tokyopop books. I moved away from comics for a while and started working in animation. Then I joined Girls Drawin’ Girls where I contributed to their portfolio books and art shows. Then after a while I decided to revisit some of my older stories I had published in Mangaphile and jumped into the self publishing arena so I could finally get back to telling their stories. Recently, I was asked to contribute to the Womanthology anthology book where I have a pin up of my own characters and as a colorist for some of the stories in the book. I have also been hired as an artist on a few artist trading card sets through Upper Deck Inc, Rittenhouse Archives and 5Finity.

What is your favourite work that you’ve done so far? 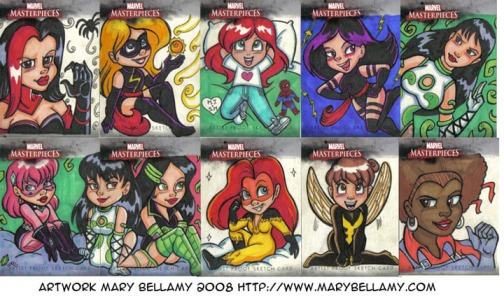 I enjoy creating my own series Faux Facts – The Truth Can Be Strange! and Ah Heck!! – The Angel Chronicles because I am completely free to write and draw the series as I envision it. Creating characters for animated concepts is also fun because you can set the entire tone for a series. It’s always fun to see your characters moving around on screen.

Did you ever get advice about the field that you’d like to pass on?

As for advice, I would emphasize these things:

What is your favourite thing to write or draw?

My favorite things to draw would have to be girls, cute things and fantasy. I love to design outfits and costumes and cute animals. For writing, I always like to have strong female leads that can deal with crazy situations without having to rely on male characters. I like the character that has to overcome monumental obstacles. It’s not interesting to me if the resolution to a problem is too easy.

In an ideal world, in what direction would you like to see your project evolve?

In an ideal world, I would love to be able to have my stories animated and reach a much larger audience for my current series.

Links to your work:

Here are my final thoughts. Love what you do! Be happy to draw/write/create what you do and have faith in your own work. Keep moving forward and you’ll go far!

A book reading, nail polish hoarding, makeup loving, TV marathoning, comic book talking Philosophy major. I want to be Rashida Jones when I grow up.
View all posts by Chantaal →
This entry was posted in Spotlight and tagged Mary Bellamy, women in comics, Women In Comics Spotlight. Bookmark the permalink.