Question of the Week — Favorite Moment of Ultimate Badassery

It goes without saying that there are more badass moments than any of us can count in comics, but this week, GRCT talks about the one moment that sticks out in each of our minds as being our absolute favorite moment of ultimate badassery.

This is SO HARD. There are so many moments among so many favorite characters over the years that I can’t think of just one. But I guess I’ll have to, and I guess I’ll be predictable.

There’s an early issue of X-Factor where Siryn is unfortunately cut off from the group. She’s nearly beat to death with a tire wrench from a guy she dared mouth off to in a previous issue. Left for dead, another crazy former mutant finds Siryn and takes her into an abandoned theatre, where he ties her up. When she slowly comes to consciousness and realizes the horrible situation she’s in, Siryn doesn’t even blink. Some crazy dude is threatening to cut her face up with a scalpel, but she point blank refuses to give into the fear he wants to see out of her.

That page has always struck me as more powerful than any building-leveling, ear-shattering sonic scream she’s ever let out.

As you can likely tell from my avatar here, Huntress is one of my favourite characters. She also owns one of my top kick ass moments. After being called a slut by a piece of scum she needs evidence from, she has her own piece of revenge. I adore it. 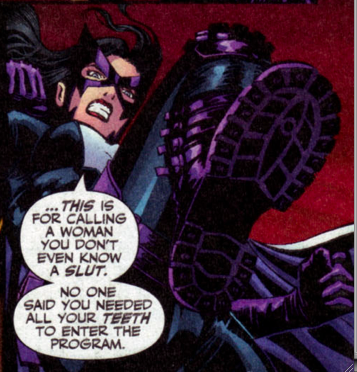 One of the first moments that came to mind was Scott Summers in Astonishing X-Men and his awesome “astonish them” line that came with the a full page spread of the entire team heading off to fight, but on second thought, I’ve actually got to be predictable and go with and X-23 moment.

I think the moment that Laura Kinney went from being a character I kind of liked and followed just for the heck of it and skyrocketed up to being a character that I adored during X-Force #19 when Kimura saws her arm off with a chainsaw and she basically just CARRIES IT AROUND WITH HER for most of the comic to make sure that no one in the Facility will be able to use her genetic material for evil. If that’s not badass, I’m not sure what is.

This one took me a little while to answer. There are odd moments of badassery that I cannot help but adore so when it comes to picking a favourite, I’m a little bit stumped.

Eventually I decided that instead of searching for something obscure or fancy I should just go with what I know I love: Molly Hayes punching Wolverine in the face.

Runways might have had its ups and downs as a title, but there is just something about tiny little Molly Hayes not only shouting at Iron Man and Wolverine, but punching latter clear out into the snow. It takes a certain kind of girl to go to toe with Wolverine, but she definitely did it. It was just so amazingly dropped in there that even though it has been months since I last looked at those panels I can definitely imagine them clear in my mind. The more I think about it, the more I am confident in my choice. Cause Molly definitely kicks ass and that is one of her crowning moments.

A book reading, nail polish hoarding, makeup loving, TV marathoning, comic book talking Philosophy major. I want to be Rashida Jones when I grow up.
View all posts by Chantaal →
This entry was posted in Question of the Week and tagged Huntress, Laura Kinney, Molly Hayes, Runaways, Siryn, X-Factor, X-Force. Bookmark the permalink.