Tell us about yourself!
I’m a costumer and crafter. I do things to comics that make collectors cringe and sell them to support my costuming habit. I knit, sew, crochet, embroider, and pretty much any other skill I need to pick up to make a costume happen. I’m a gamer and don’t play many multi-player games. I love BioWare games and am obsessed with Mass Effect. I made myself an N7 iPad cover and have made several shirts for myself. My iPhone calls me Commander Shepard and all my best friends have different characters voices assigned to their text tones that are appropriate for their attitudes (Spaced is Jack and Spazzy is Tali). I grew up gaming with my dad, he used me as his guide though Resident Evil because he had a terrible memory, and I can still tell you where the typewriters are even though I never played the game myself. FPS’s used to make me very motion sick. It wasn’t until Halo ODST that I was even able to make it though the single player mode on them. I’m getting better, but it’s still why I don’t play multiplayer. I’m the Tony Stark of the Nerd Girls’ Eye View, a.k.a. I’m responsible for all the tech and making sure the show get’s out every week, which means if it isn’t up, it’s all my fault. That’s how we ended up with a clip show one episode, we recorded the entire show… or so I thought, so I had to do something. We’ve only missed one weekly update in almost 2 years, I’m really proud of that. 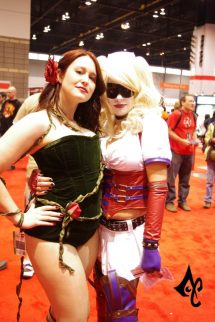 How did you get into comics?
My dad initially. He read a lot of Spawn and we sometimes went to the local comic shop and I’d pick up Wonder Woman, but after he passed away when I was 19 I kind of got out of the “nerdy scene” and didn’t really get back into comics until I met my husband about 9 years ago. I’m starting my niece and nephews early though, they each get a shipment of comics from their auntie every month.

Do you just read comics, or do you express your love in other ways?
Of course I read comics but I also host the podcast Nerd Girls’ Eye view with my two best friends Spaced and Spazzy. I costume as well, I’m a full member of the Wolf Pack Elite and I’m submitting my Jedi costume for approval so I can troop with the Dantooine Base of The Rebel Legion soon. Most of the time I just hang out in costume for fun, but I’d really like to get more into charity work but there really aren’t many costumers in my area so it’s kind of tough.

What are some comics you’re currently reading and enjoying?
Morning Glories, I never would have picked this book up if it weren’t for Spaced and Spazzy. I don’t usually read comics that aren’t you typical super hero book and I’m really addicted to this one. Valen the Outcast, I picked this one up at C2E2 after we had Michael Allen Nelson on the show. It takes me back to my D&D days and is a really awesome read. Catwoman, because I’m pretty sure Spazzy would kill me if I didn’t read it. Birds of Prey, I really loved the Gail Simone run on BoP but I’m enjoying the new 52 version as well. And I know that some people are going to roll their eyes but I’m really liking Aquaman right now… but then I just love Mera. I’m way behind in my Green Lantern too but I loved the Blackest Night Brightest day stories.

Who is your favorite character?
Because we share a last name I love Emma Frost. I always feel like she gets a bad wrap because of the whole Hell Fire Club thing but I love her. Black Canary and Wonder Woman are at the top of my list too.

Do you have a favorite comic storyline?
I don’t know that I have a favorite of all time. Usually the story I’m reading right now is my favorite, until the next issue comes out.

How do you usually buy your comics?
I buy a lot of my comics digitally. When you move 3 times in 2 years you kind of try to cut back on things that you have to carry so I usually only buy paper copies of things I really want to have forever. I have a few trades of things I got into late but I usually can’t wait long enough for things to come out in trades.

What are some things you love about comics?
Some things that frustrate you? I love that the stigma that only “rejects” or children read comics is going away. I wish it had happened sooner. I think if I had been less afraid of what people thought of me after my dad passed away I might have never given up on them, but I can’t really blame that on the comic books. Comics are a great opportunity to get away for a few minutes. I’m an avid reader and one of my biggest pet peeves about novels is that sometimes you just can’t walk away after a chapter and so you end up staying awake until 2 or 3 in the morning when you should have gone to bed hours ago. So with comics, even if you read an entire story arc you can usually read it in 20-30 minutes and there’s a sense of completion that you sometimes can’t get from a chapter of a book.

What does your dream book look like?
I think we’ve talked about this one on the show and I never have a good answer. It always depends on what I’m reading at the time what I’d like to see in a comic. One thing that never changes though is that I’d LOVE to see a Birds of Prey movie. I think there needs to be a great movie about women as strong and supportive of each other as a Birds.

Any final thoughts?
Never be afraid to be yourself. I spent a lot of my life pretending to be who other people wanted me to be and it made me miserable. So now I’m me, take it or leave it.

The show is posted at Comic Related every Thursday afternoon, and you can often find it sooner on iTunes.

A book reading, nail polish hoarding, makeup loving, TV marathoning, comic book talking Philosophy major. I want to be Rashida Jones when I grow up.
View all posts by Chantaal →
This entry was posted in Reader Spotlight. Bookmark the permalink.