Princeless Giveaway: Why You Should Be Reading an All-Ages Comic 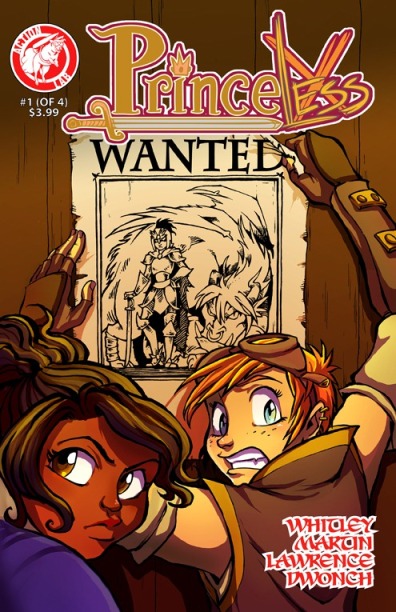 I first reviewed Princeless almost two years ago, and since then, Jeremy Whitley and Action Lab Comics have taken big strides. Princeless is up to volume 2 now, with each issue costing only 99 cents, and Action Lab has expanded and created tons of titles, one of which is Jamal Igle’s Kickstarter project, Molly Danger.

In fact, you should read the incredibly awesome Molly Danger/Princeless Free Comic Book Day crossover. Do it, you won’t regret it.

Princeless has three things going for it that I think are incredibly important right now, both individually and separately:

You’d be hard pressed to find all three of those in any other comic these days (if you do know of any that fit the bill, pass the names along!), and that’s…well, that’s kinda sad. I can tell you that if I had Princeless when I was a ten year old discovering Tintin comics for the first time, I would have been all over it. I mean, I was twelve or thirteen when I first saw the X-Men cartoon, and Storm was my ultimate hero just because I could see someone who looked like me on TV.  Miles Morales is playing that same role for colored kids who may be getting into comics for the first time, and so is Princess Adrienne.

I’ve said a number of times that the reason I started writing “Princeless” was because I wanted a book that I could share with my daughter. I wanted her to see a girl with the power to affect her own life. I wanted her to see a girl with brown skin portrayed as a hero with agency. I didn’t want her to grow up believing that she should aspire to be like those sad little princesses that sit around in a tower and wait for their prince to come. I didn’t want her to define herself by her love interest. I wanted her to be empowered.

And isn’t that what comics is all about? Isn’t the super hero genre about empowering the little guys and girls of the world and telling them that they have the power to do the right thing and be the good person that they want to be?

All ages comics are important. Comics that provide a safe, happy space for kids to read and work their imagination in are important. No unneeded sexualization. No over the top violence. Just good old-fashioned storytelling that young kids, young girls, can relate to and find inspiration in.

And when adults like us enjoy it, well, that’s a plus.

I’ll be giving three winners a digital copy of Princeless Volume 1 through Comixology.

12 Responses to Princeless Giveaway: Why You Should Be Reading an All-Ages Comic