Wednesday! Glorious comic book day! Check out our post to see what we’re looking forward to reading this week, and let us know what you’re picking up as well.

Our pick of the week: 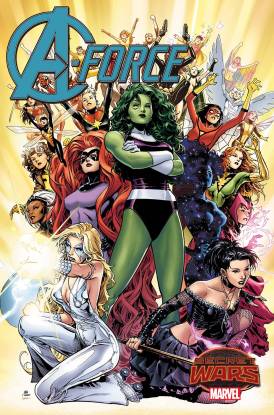 Marvel’s Mightiest Women finally get their own explosive series! In a secluded corner of the Battleworld, an island nation is fiercely protected by a team of Avengers the likes of which has only ever been glimpsed before? Fighting to protect the small sliver of their world that’s left, the Amazing A-FORCE stands shoulder-to-shoulder, ready to take on the horde!

This week’s and last week’s comics are about to become “trapped in an airport/on an airplane for way too long” reading fodder. There’s a large chance I’m going to pick up something random, but for now here’s the “plan”.

A book reading, nail polish hoarding, makeup loving, TV marathoning, comic book talking Philosophy major. I want to be Rashida Jones when I grow up.
View all posts by Chantaal →
This entry was posted in Picks of the Week and tagged A-Force, Archie vs. Predator, Jem & the Holograms, Kitchen, Letter 44, Loki: Agent of Asgard, Mad Max, Spider-Verse, Ultimate End, Wytches. Bookmark the permalink.