In the weeks since SDCC, I’ve been going through all the news that came out of it. Of course there were things that I missed at the time, and one of the things I missed (and I have no idea how) was the news there was a manga coming out based on Scott Westerfeld’s Uglies books.

If you don’t know Uglies and the subsequent books, they’re a YA series set in a dystopian future where teenagers undergo a cosmetic surgery process to become ‘pretty’. Uglies is the first, told from the perspective of Tally, a girl about to go through this process. Things don’t work out how she expects them, and the way the book deals with body-image, self-worth and peer and societal pressure are fascinating.

In the manga the story will be told from another perspective. Shay, a friend of Tally’s and the cause of a lot of Tally’s misfortune will get to share her story. Knowing that we’ll see it from Shay’s side and see the already well-developed world expanded upon is really exciting.

Joining Scott in this project is Devin Grayson as writer, Steven Cummings on art and Yishan Li on toning and lettering. I asked Scott and Devin if they’d answer a few questions for us here at GRCT and they were very happy to.

Why did you want to tell it again in a different medium?

Scott: I’ve always wanted to retell the story of Uglies from Shay’s point of view. As Tally’s sidekick, she gets a raw deal in the books, and sometimes from fans too. In fact, I often ask bookstore audiences to imagine how Tally’s actions must have looked from Shay’s perspective, just to make them think. We ally ourselves with a novel’s narrator too much sometimes, which is in a way just an extension of our own egocentrism. I thought seeing the same events from another ego, one that’s often antagonistic with Tally’s, would be useful and interesting.

But writing “Shay’s Story” (the manga’s title, in fact) as a fifth novel in the series just seemed a bit redundant. So I thought a graphic format would be fun.

Why did you pick manga?

Scott: A realistic visualization of the characters might have the reader saying, “But she’s not THAT pretty,” which would undercut the point of the books. But Manga has a lot of codes and shorthands for indicating beauty—big eyes and tiny noses and such. So we can deliver beauty by fiat, as it were.

Also, I’m a big manga reader myself, and wanted to see the action sequences rendered in that style, with the hoverboards busting out of manga’s more fluid frames and bigger speed blurs.

What aspects of the story would you both like to see expanded in the manga? 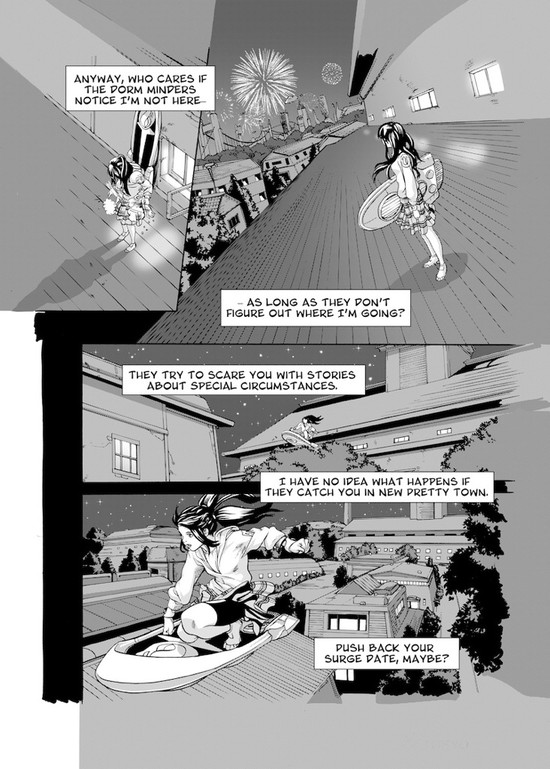 Scott: Seeing it all from Shay’s perspective means moving the beginning of the story several months earlier. As readers may recall, Shay knew about David and the Smoke already when she and Tally met, having attempted an escape well before the novels start. She knew Zane (who doesn’t appear till the second novel) back then as well. So it’s been fun to go back and show that part of the backstory, when the Crims (and Zane) were ugly. It’s also been fun to reveal the real reason why that earlier escape attempt failed.

Will there be any relation between the manga and the movie, or are they two separate projects?

Scott: They’re completely separate. The movie will stay in Tally’s perspective. But it never hurts to visualize things for Hollywood.

Scott, what drew you to Devin as a writer?

Scott: She created a lovely and touching miniseries for Vertigo called USER. It had some of the same themes of body dysmorphia (though an online version) and dealt with the grand sfnal theme of identity that’s so important to Uglies. It was key for me to get someone who can give characters big emotional arcs, which is what Uglies is all about. And Devin’s work on Nightwing reassured me that the action sequences would be awesome as well.

Devin, what drew you to the story?

Devin: Uglies is a pretty irresistible series! I really appreciate the allegorical nature of the struggle the characters find themselves in and all the great questions it raises; what does it mean to be beautiful? What does it mean to be safe? What does it mean to be free? What does it mean to be a citizen, a friend, an individual? But Scott’s writing also pulls you in well beyond philosophical ruminations–these characters are so alive and genuine, it’s impossible not to care about them! I was particularly drawn to the character of Shay–perhaps because I’ve always had a soft-spot for sidekicks–so I was even more excited when I learned that the graphic novels would be told from her point of view. It really adds a new dimension of depth to the original series and compliments it beautifully, as well as standing alone as a terrific story about a different kind of girl facing the same kind of problems that plagued the novels’ protagonist, Tally.

How collaborative was the process?

Devin: Our process was very collaborative, which is one of the main differences between prose work and graphic novels. Perhaps Scott will disagree with me, but in my experience writing a novel is a very isolated, self-directed process. You spend hours and hours alone bringing the stories in your head into a sharable written narrative. The creative energy that takes–all of which must be self-generated–is enormous.  By its very nature, work in the comics medium is much more collaborative. Unless you are creating, scripting, penciling, inking, coloring, lettering and editing your own graphic novel, you are immediately in a very collaborative creative environment. That’s part of what I love about working in this medium–the chance to be part of a team as I write (there’s that sidekick complex again!). There’s a special kind of camaraderie in comics (and, by extension, graphic novels) that doesn’t exist in any other written medium, with the possible exception of writing lyrics in the context of original song material for a band. There is still a period of time, after receiving Scott’s outlines and before turning a script in, in which I’m working alone, shaping and pacing the story–but knowing that I’m wandering through someone else’s world makes me feel more like a tourist on an amazing group journey than a god-like world creator alone in an undefined universe (which is how it feels to write an original novel).

Scott: It is true that having collaborators does bring a whole new set of energies into the process. My current novel series, Leviathan, has artist Keith Thompson illustrating for it, and Alan Cumming reads the audiobooks. Both of their contributions have affected the way I write the books at every stage. But with the Uglies manga, I’m much more like someone watching and guiding the process, which has been interesting in an entirely different way. To extend Devin’s metaphor, I’m kind of like a tour guide, saying, “You don’t want to go down that street. The cool stuff is over here.”

How has the process worked between outlining and writing?

Devin: Scott sent me detailed outlines about what was happening to Shay parallel to Tally’s experiences in the books, and I developed them into a graphic novel script for our amazing artist, Steven Cummings. Scott and our fantastic editor at Random House/ Del Rey, Betsy Mitchell, were always available to me to answer questions or help me think through a story-telling knot, and they both edited my scripts when I was done and gave them back to me to tighten up before sending them on to Steven. I helped collect visual references for Steven and he also has the support of Scott, Betsy and I as he works. Since we all live in different parts of the world–I believe Scott was in Australia when we started, I live in California, Betsy’s in New York and Steven lives in Japan–there were a lot of both playful and serious emails bouncing around cyberspace as we worked together to create these new stories.

Thanks so much to both Scott and Devin for answering our questions. Shay’s Story is set to be released in May 2012. Check Scott’s website for updates.