Continuing on from the Gail and Nicola interview, Dee (or should we say She-Hulk?) had the opportunity to ask the very same questions to Dan.  So, she did, and gleefully. 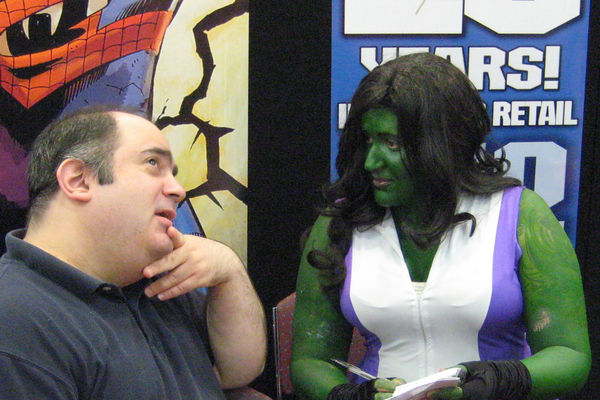 Name a three character team up you’d like to write as a team up – but it can’t be characters you’ve written before:

If you can send Spiderman through time to any time period, where do you send him?

Dan: Five years into the future, to see what it is like.  So he can see all his mistakes and tragedies.  (Dee’s note, the last was done in melodramatic voice)

Dan: I don’t think there is an overrated villain.  Every character out there, it’s how you treat them.  There’s a good story for every character.  For years I used to say Vulture, he’s an old man, you’re beating up an old man.  How can you even like Spider Man for beating up an old man.  I kept doing this riff over and over, and Tom Brevoort said, I’m forcing you to write a Vulture story.  You have to see there’s merit in this character, write a Vulture story. I started playing around with him and thought ‘oooh, I like this Vulture story’.  Every character has a good story in them and you can’t overlook it.

Dan: I would really like to a see a world where the most powerful character is a female character like Superman, because you don’t see that.  You have Phoenix, you have Wonder Woman but (Dan looks at Gail and Nicola) I’m saying that in front of these gals, Wonder Woman isn’t Superman.  Superman has a certain prestige and it would be nice to see a world where that main character is the female.  I’d like to see Power Girl male.  I think when everyone sees Power girl they sexualise her because of the boob window.  There’s more to her than that, and I think if you gender-swapped her, and had a Power Man (and not like a Luke Cage) they would be forced to examine what about Kara is an interesting character.

Finally, your favourite Disney Princess (and I specifically asked him if he were to write one into one of his books)

Dee: So there you go.  Some short, sweet and silly interviews.  We hope to have a few more from future cons.  Who knows, we may work on a standard question list.

Canastralian. Cosplayer. Comic book addict. Travel addict. Convention addict. ...I think that's a lot of addictions and I might need a 12 step program
View all posts by deense →
This entry was posted in Interviews and tagged Dan Slott, interview. Bookmark the permalink.