Hell of a week, comic-wise! Sadly, I did not get to partake in Free Comic Book Day, mainly because I didn’t even realize it was upon us until 4am Friday night. When I was still drunk. Anyway! 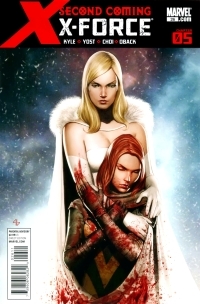 Okay seriously, Second Coming is shaping up to be one of the best X crossovers ever. There’s such a momentum to it and some fantastic storytelling going on. I know I’m practically saying this every week now, but that doesn’t make it any less true.

Though the big death in this issue was predictable from the start, that still didn’t keep me from feeling a horrible sense of dread as the issue unfolded. Nightcrawler couldn’t have asked for a better send off.

And coming back to X-Force is Mike Choi on art, who has been getting nothing but praise for his work in this issue, and he deserves every single bit of it. He’s my favorite artist ever, and his talent shines in this issue — especially in the incredibly moving page showing Wolverine’s reaction to Kurt’s death. Of course, Choi would only be half as effective without Sonia Oback, his colorist and partner. I wish they could work on everything ever, I’m such a fan. 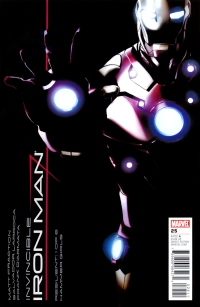 After some great stuff with World’s Most Wanted and Stark: Disassembled, it’s hard to think of a direction for Fraction to go in to live up to the two previous arcs, and it really shows in this issue. The plot itself was boring, really. Adding new foes in the HAMMER women is a blatant attempt at tying the comic to the Iron Man 2 movie, and that aspect of the plot was way too boring. I’d love to have had this issue be a bit of a breather before diving right into another plot arc.

Tony’s picking up the pieces from the past few years he doesn’t remember, with Pepper at his side. It’s nice to see Thor reaching out to Tony to try to mend the fences between them, and Reed Richards’ acceptance of Tony here and now was really nice.

And that reveal of the new Iron Man suit…yes. YES. Almost makes up for how disappointing this issue was overall. 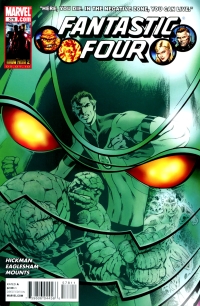 Man, Hickman is just hitting it out of the ballpark with this Four Cities storyline.

Johnny Storm is one of my favorites, so I was pleased to finally get his issue (and thus his city) in this story arc. Hickman writes a really great Johnny, knowing how to handle both his humor and his serious moments. Reed talking to Johnny was a really lovely moment, as was the Bug Lady line.

I’ll admit to being a bit confused whenever Hickman moves to one of the different cities to advance the storyline, but it all works.

Eaglesham seems to have settled into his art duties well, despite him still drawing Reed and Johnny like they’re lumberjacks. There were a few panels of Valeria that were just incredible. 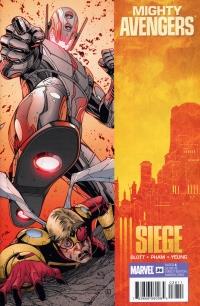 So I’m still wondering what kind of crack Dan Slott is on lately, but I’m mostly pissed off at the major spoiler for Siege #4 this issue gives away. This wouldn’t be a problem if Siege #4 hadn’t been pushed back, but ugh. So lame.

Anyway. This Ultron plot continues to be incredibly weird and not really all that interesting, beyond the bits revolving around Jan. I don’t know, man. It’s like Mighty Avengers is ending on a whimper instead of the bang it deserves to.

And I still can’t believe Slott worked so hard to build Pym up just to have it end like this. 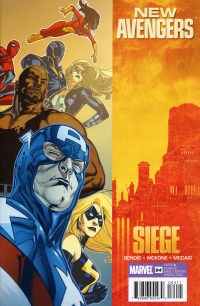 I’m trying to figure out what on Earth makes Bendis think anyone really cares enough about The Hood. I’m sure he has fans, but was it enough to focus this entire Siege tie-in issue on him? I can see what Bendis was angling toward here, especially with the parallels between Parker and Clint looking for Whitney and Bobbi in the rubble of Asgard. But it’s a shallow attempt at best at humanizing a villain I didn’t care about in the first place, especially when Whitney completely mucks it all up at the end. I was hoping this was the end for The Hood, but I guess not.

McKone’s art continues to surprise me – he’s got a great hand at action, and the fight pages were all fantastic to look at. 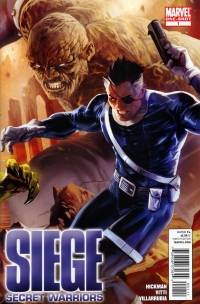 I don’t read Secret Warriors at all (though I’ll be rectifying that pretty soon), and really only read this because I’ve been interested in seeing Phobos’ reaction to Ares’ death. While it didn’t turn out exactly how I expected or hoped (I wanted Phobos to head to Asgard and kick some Sentry ass), it was still satisfying seeing Phobos take on what seemed like the entire damn Secret Service just to give the President a message. I think that last part of it fell a bit flat after the ass kicking he dished out, but everything until then was great.

Also great: Nick inviting Cap to a Howling Commandos reunion in the middle of the fighting at Asgard. With anyone else, the moment would have been a bit too much, but this is Nick Fury. It worked. 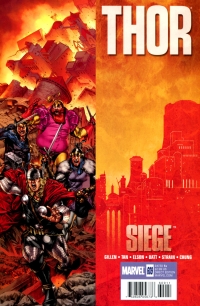 I think the highlight of this issue for me is seeing Loki spin a web of lies to try to save himself from the crapfest he’s brought on Asgard. It’s really interesting, seeing what he says here and comparing it to seeing his true motives in his Siege one-shot. Thankfully, Balder doesn’t fall for his lies this time, and ends up exiling Loki from Asgard. Finally, man.

I think the highlight of the issue for me, though, was Balder calling all of Asgard to arms to kick some serious ass. I’m a sucker for a great battle call, I can’t deny it.